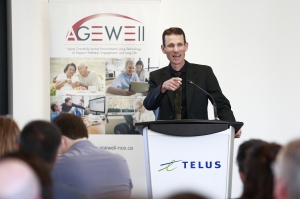 Richard has extensive experience working at the intersection of academia, government, and industry. As the Director of Technology Management & Entrepreneurship at U of T’s Impact Centre, he manages training and support programs that provide student entrepreneurs with the early-stage guidance to help move technology from the lab to the world. He is co-creator of Techno – an elite training program for scientists and engineers building technology-based companies. Techno has nucleated over 100 start-ups since 2010. Richard received his Ph.D. in Chemistry from U of T followed by a postdoctoral fellowship at the NRC Steacie Institute. As a research scientist for a US technology development company, he was responsible for translating new technologies into commercial products. He was also the Principal Investigator on several Small Business Innovation Research grants through the US DoD, NIH, NASA, and the EPA. Richard has been directly involved in the creation and growth of start-ups. He co-founded Axela, a Toronto-based diagnostic company with tools for rapid, real-time immunoassays and biomolecule analysis. Richard currently serves as President or Director on the Board for several for-profit and not-for-profit companies. He has a strong passion for the development of technologies and the commercialization of scientific research.